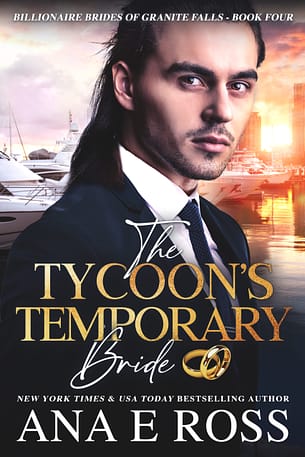 A love-shy billionaire. A damsel-in-distress. Can this temporary marriage work, or will it complicate matters of the heart?

On the run from a human trafficker, Tashi Holland arrives in Granite Falls looking for the one man she was told could protect her. But without knowing his name or his identity, Tashi feels lost, scared, and vulnerable. She has no idea whom to trust, so when she bumps into a man in a café, who pays a little too much attention to her, she panics and runs.
Since he was left standing at the altar, Adam Andreas has been quite content with temporary relationships. That all changes the day he literally bumps into Tashi Holland. With one look into her frightened, emerald eyes, Adam finds himself falling into his old habit of trying to rescue damsels-in-distress—something he has sworn never to do again.
However, one late-night call from Tashi sends Adam rushing to her aid, and little by little, Tashi begins to trust him. But when she discovers that Adam is the man she has been looking for, she fears that he might suffer the same fate as the FBI agent who sent her in search of him.
Will Tashi conquer her fears and trust Adam to protect her, or will she go on the run again in order to protect him?

What Readers Are Saying

“Another addictive read from this author.”
“…filled with drama, mystery and one smoking HOT couple”
“Adam...so sensual, so caring, so…everything”
“Everybody deserves love like this!”

READ AN EXCERPT FROM THE TYCOON'S TEMPORARY BRIDE

Tashi wished that her educators had been a little more open-minded and forthright about a young girl’s developing body, about the hormones running wild inside her, instead of teaching her that her awakening arousal was bad, even evil to a point. Teach her instead, that her desires were normal, and that one day she would meet a man—that one special man—with whom she would want to explore those feelings and find fulfillment of the most delicate form.

That special man for Tashi was Adam, the man who’d save her life, and in whose presence Little Eve felt safe and treasured enough to emerge from the shadows where her uncle had shoved her, eighteen years ago.

Little Eve loved the sight of the man before her—his elegantly chiseled cheekbones and straight nose, his rosy lips forever curled on the edge of laughter, and his sharp chin that spoke of distinction and dominance. Little Eve loved the wispy mat of hair on his chest and stomach that extended into a thicker thatch at his groin, then thinned out again on his thighs and legs.

The last button undone, Tashi slid the shirt off her shoulders, down her arms, and let it slither to the grass behind her. She inhaled sharply as the cool summer breeze—charged with the electricity from the force of the waterfalls—caressed the skin of her arms, her chest, and quivering stomach. It whispered of the wanton thrills awaiting her.

Tashi tossed her head in defiance and sighed deeply as her long curls brushed against her shoulders and across the curve of her back—tickling her. Extending her arms out at her sides and throwing her head back, she closed her eyes and rotated her neck from side to side, ever so slowly, and welcomed the nascent sensations nurturing her arousal.

Never had she imagined that something as simple as her own hair brushing against her skin could send jitters up and down her spine. Perhaps she’d been aware all along but because she’d been programmed not to respond to anything slightly sexual, she’d ignored the elusive stimulation. If her own hair could induce such titillation, she could just imagine the fire Adam’s silky mane trailing up and down her naked body could evoke in her.

She hoped to burn until the thirst and the hunger inside her were assuaged, until there was nothing but ashes left of her. Her head began to sway as if to its own music—a secret melody her soul had composed eons ago. Picking up the tempo, her body began to rock from side to side, undulating on a weightless wave.

The whisper of her name brought Tashi floating back to shore. Her lids fluttered open to find Adam staring at her. His eyes were ablaze with a sensuous flame, his sexy mouth pulsing with the promise of the passion that could be hers if she dared to reach out and ask for it.

She wanted it. Her gaze slid across his aristocratic face, brimming with gentleness, kindness, and strength. It was a face she hadn’t known she’d been searching for her entire life. It said nothing, yet everything she’d ever want to hear. For the first time since they’d met, Tashi didn’t feel shy about openly admiring Adam, gazing unabashed into his eyes, feeling the magic pulling her down into the enchanting chasm of the blue oasis of his soul. In the past week, she’d stolen glances at him while they ate their meals together, but each time he’d met her gaze, she’d averted hers, but not before she’d caught his smile that seemed to say, Don’t look away. I enjoy your furtive glances.

Today, Tashi felt different, reborn, like everything she’d known about herself up to this point in her life had been false. She felt as if she was meeting the real Tashi Evelyn Holland for the first time. She liked her—this serenely wild, slightly adventurous young girl who was eager to enter the new and unfamiliar cosmos unfolding before her eyes.

Little Eve had found her Adam, her light, her guide, the man who could teach her how to dance and play, laugh and revel in this numinous place where no one or nothing could hurt her.

Anxious to shed the remnants of her clothes as quickly as she felt the restrictive teaching of her past dissolving around her, Tashi reached behind her and unsnapped the clasp of her bra.  Keeping her eyes locked with Adam’s, she slid the straps off her shoulders and let the lacy garment fall noiselessly to the ground on top of her shirt. Her nipples hardened and tingled when Adam’s gaze and the cool breeze seemed to simultaneously brush them in an invisible kiss.

“Your home is beautiful, Tashi. More lovely than any I’ve ever seen,” he said, his voice husky with emotion.

Tashi thought it strange that he hadn’t said she was beautiful, but then she remembered that he was a yogi. He would regard the human body as a house for the human spirit—the true you. He hadn’t really met her yet. She hadn’t met her.

“Your home is beautiful too, Adam.” There, she’d said them, spoken the words that had been echoing inside her since she first collided with him in the café. He’d been naked in her presence before, when he’d first brought her to his home. Although she’d been faintly aware of his strength and virility, she’d been in no condition to evaluate and appreciate him. She was well now, and definitely appreciating him.

Tashi felt a rush of wickedness as her gaze slid from his face to his neck where his pulse seemed to beat in time with hers. She admired the way his broad and muscular chest and shoulders tapered off into a flat, corded stomach, narrow waist, and slim hips. She’d often admired his physique under his clothes, but she was salivating now as her eyes drew lower to where his engorged penis protruded like a pillar of bronze muscle from the thatch of dark hair at his groin. It was far more intimidating, yet captivating up close. She wondered about the texture of the thin skin that ran the length and girth of him—from the root to the glittering tip with a wide opening that looked like a small mouth.

Tashi licked her lips as muscles pulsed deep inside her body.

“Go on, Tashi. Take it all off,” Adam coaxed, reminding her of his promise not to touch her until she was completely naked.

Incited by his words and impatience, Tashi toed off her sneakers and heeled them behind her. She then unsnapped the clasp of her jeans and pulled the zipper down. When her fingers slid beneath the waist of her jeans and her panties, Adam groaned. Capturing his gaze again, she began to push them off her hips, slowly and provocatively, wiggling her hips and buttocks to fight the restriction. Down, down, she eased, until she felt the breeze ripple through the auburn carpet covering her Venus mound.

Adam groaned again. The sound knocked her off balance and, finding herself pitching forward, she put her hand out to break her fall. Of all the places her hand could have landed on Adam’s anatomy, it chose to land on the area of his groin. A shot of adrenaline, mixed with fear and excitement coursed through Tashi’s system, as the naked hardness of his body send lust rushing through her.

I recommended that you do not read this prologue until after you have read The Tycoon's Temporary Bride, as it reveals a mystery in the plot, which is the reason I decided to remove it from the beginning of the book. I did not know that the plot point was a mystery when I wrote the prologue. The characters told me it was a mystery halfway through the manuscript.

If you have read the book, then go ahead and enjoy this initial meeting between Tashi and FBI Special Agent, Paul Dawson. The prologue is in Paul's POV, and it takes us deeper into his psychological makeup.


Also in this series