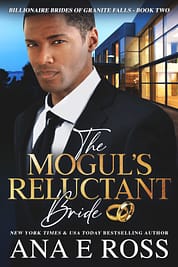 Can she free his heart from the demons that plague him, or will his fears keep him from loving again?

Following the deaths of her sister and brother-in-law, Kaya Brehna is awarded custody of their three children. To avoid financial ruin, she must move them to Palm Beach where her successful career in interior decorating can provide financial security. Her plans are, however, thwarted by New Hampshire business mogul, Bryce Fontaine, who is determined to keep his godchildren in Granite Falls at all costs—even emotional blackmail.

Ever since his family was killed, Bryce Fontaine has been plagued by torment and regret. Five years later, his three godchildren are the closest thing he has to a family. But when their parents’—his dearest friends—sudden deaths threaten their close-knit relationship, Bryce would be damned before he allows some stranger—aunt, or not—to uproot them from the only home they’ve ever known, and move them a thousand miles away from him.

Can Bryce and Kaya find a way to work together for the good of the children whom they both love, or will the pain in each of their hearts keep this blended family divided?